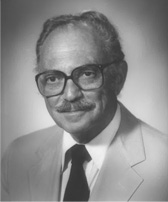 URISA emanated from a conference held on August 28, 1963 on the campus of the University of Southern California, organized by Edgar Horwood and attended by 48 people to trade information on developments in regional information systems.  This was billed as the 'First Annual Conference on Urban Planning Information Systems and Programs.'  Additional annual conferences were held from 1964 to 1966 in Pittsburgh, Chicago, and Berkeley.  At the 1966 Berkeley Conference, attendees approved a constitution establishing the Urban and Regional Information Systems Association (URISA).

The conference held in 1967 in Garden City, New York was the first called the URISA Annual Conference.  However, URISA considers that its first conference was the one held in 1963 on the USC Campus in Los Angeles.

Edgar Horwood founded URISA and was its first president.  Horwood provided intellectual leadership toward building an interdisciplinary association and served as a constructive critic in the development of ethical practices in the emerging area of applying information systems technology to urban and regional applications.  Horwood authored a paper that is published in the Proceedings of the Third (1965) Conference on Urban Planning Information Systems and Programs titled, Association Needs for the Urban Information Systems Field that called for the creation of what was formed in 1966, the Urban and Regional Information Systems Association.  He patterned URISA after the Regional Science Association, an inclusive interest association, not an exclusive professional society overly concerned with credentials.

A review of the URISA literature from 1963-1991 revealed a number of discernible trends and patterns in the focus of the organization and the interest of its membership.  These can be categorized as lost themes, including concern with mainframe computers and concern with social change.  Themes that have been redefined (same words, different meanings) include the terms 'information system' and 'multi-participant.’  New themes include GIS as a profession, legal matters, and concern with the costs of data and data management.  Significant trends include increasing use of geographic-based data, a shift from technology to institutional concerns, less conceptualization and more 'doing,' more analysis and less raw data retrieval, increasing demand for standards, establishment of GIS as a profession and a career in itself, and a shift toward decentralized computing.

In 2002, a further review of URISA’s forty years observed nine themes that define URISA, as follows:

The nine themes encompass many of the issues and accomplishments that defined both the IS/GIS/LIS discipline and URISA in the 1960s, 70s, 80s, and 90s.  Upon reviewing the themes, graphics and commentaries, it appears fair to conclude that URISA has not only persevered, it prevailed, and has steadily moved to the forefront of geospatial research, development, and applications.

URISA has evolved from a small and rather loosely associated group of professionals with a common interest in urban planning information systems, into a major international organizations boasting over 2,000 members with interest in a variety of topics related to development of effective management and geographic information systems (GIS).

Once confined to the back rooms of university labs and large government agencies, GIS is now ubiquitous.  Once a stand-alone application, large-scale GIS is increasingly embedded in complex enterprise information systems.  The number of people who use GIS has grown phenomenally, and the operating environment has become much more complex.

With the evolution of the GIS profession as a specialized field, the URISA Board of Directors has embraced a series of bold initiatives aimed at re-focusing the organization to better serve its membership.  These initiatives are designed to adapt and improve the organization to better meet the joint and separate needs of GIS professionals and practitioners.  The intent is to make URISA the primary professional development organization for GIS professionals, as well as for IT professionals who need to support GIS within their agencies and businesses.  Our traditional membership base composed of GIS practitioners remains central to our mission, but we must recognize that URISA’s success can come only when the growing and changing needs of the membership are met.